FALSE PRETENSES
False pretenses are obtained by a false representation of a material past or existing fact which the person making the representation knows is false made for the purpose of causing and which does cause the victim to pass title to his property.

Case Study 1: Miss Saigon,
a musical by Claude-Michel Schönberg and Alain Boublil, with lyrics by Boublil and Richard Maltby, Jr. It is based on Giacomo Puccini’s opera.
1.The setting of the plot is relocated to 1970s Saigon community during the “Vietnam War” [sic], and the epic love story is represented by a romance between an American GI and a Vietnamese bargirl/prostitute.
2.The fact of naming a bargirl/prostitute under a common appellation of Miss Saigon [title given to all female citizens of the former Capital of South Vietnam] shall be considered  a misrepresentation or untrue statement of fact that induces viewers and ordinary people to expect encounter any female citizen of Saigon, past & present, be bargirl/prostitute.
3. The misrepresentation is negligent if made by careless ignorance; fraudulent, if the misreprentation occurs when a contracting party [musical author/Official Broadway site] knowingly makes an untrue statement to attract clientele among former GIs, American Vietnamese/Asian communities, and any other interested parties.
4. The fraudulent or negligent misrepresentation of Miss Saigon [a bargirl/prostitute] may be considered a libel: broadcasting through a show opera an untruth about Miss Saigon-in-general, doing harm to all female citizens of Saigon, the former Capital of South Vietnam … The fraudulent or negligent misrepresentation of Miss Saigon [a bargirl/prostitute] may be considered defamatory if it tends so to harm the reputation of Miss Saigon-in-general, as to lower her in the estimation of the global community or to deter third persons from associating with her.
5. Figuring Miss Saigon [a bargirl/prostitute] and the Engineer [as an intellectual pimp] as sole characters representating the Vietnamese culture during the “Vietnam War” [sic] is a derogatory, insulting defamation.  Under the same misrepresentation & false pretenses, the communist regime of Hanoi once called the Vietnamese refugees “American whores & pimps” to arrogate Saigon & usurp its citizens’ properties.

Case Study 2: THE VIETNAM WAR, a film by Ken Burns & Lynn Novick
PART 1 [Sunday, Sep 17, 2017] on WETA & PBS banked on Nguyễn Ai Quốc with more time on the screen, compared to other historical/political figures [French, Vietnamese, American]. He should be awarded best “Actor” of the episode.
Nguyễn Ái Quốc/Quắc [with translation, The Patriot] was magnified as a historical rising star & singled out as the predominant Vietnamese hero & sole patriot against the French colonialism in Vietnam which lasted more than eight decades; and ready to be considered a respectful combatant and a valuable contender of the Americanized war in Vietnam. Is it a predetermined justification for Potus Nixon to say “No More Vietnams” and for the Americans to retreat in “peace and honor”, without losing face?  The show featured a concordance pattern to equalize good enemies and good losers — all braves.
With this “celebration” in mind, the film makers deliberately left out:
1. So many generations and factions of Vietnamese revolutionaries & combatants against the French Colonial Regime;

2. The participation of other Vietnamese political factions joining the political entity Việt Nam Độc lập Đồng Minh Hội [also known as Việt Minh] which was conceived primordially as a Vietnamese Alliance for Independence, later usurped by the Vietnamese Communist faction.
3. The fact that Nguyễn Ái Quốc was not only a Soviet Komintern agent, but also had multiple assumed names/aliases, the last one Ho Chi Minh, documented recently by a taiwanese scholar as a Chinese officer known as Hồ Tập Chương of Hakka origin. Are these mystifications political lies and usurpations?  But the multiple political backgrounds of Nguyễn Ái Quốc/Hồ Chí Minh sufficiently reveal his affiliation with and devotion to  the Soviet Komintern (Communist International), The Soviet Union (USSR) & the Chinese Communist Party (CCP), more than his “own?” country.
4. The fact that the French intended to set up a pitched battle to draw out the Vietminh forces and destroy them at Dien Bien Phu.  However the fiasco of this piece battle in May 1954 was due to [a] the decision of The United States to avoid overt direct intervention, contrary to the Mutual Defense Assistance Act [President Dwight D. Eisenhower indeed stated, “Nobody is more opposed to intervention than I am”], while [b] the Viet Minh, with massed troops and heavy artillery on surrounding positions, received considerable aide, training and leadership from China.
The introductory notions from Part 1 of the film are provided to shape up the architecture of the so called VIETNAM WAR in different facets, with provided  formulation to end it in “peace & honor” for America.
The following episods are almost replica of the SAME & PREFAB PATTERN of the conduct of war:
1. Only two-sided battlefields between [a] US Armed Forces VS Vietnamese People’s Army (VPA), also known as North Vietnamese Communist regular forces & its satellite NLF/VietCong; while [b] The Army of the Republic of Vietnam (ARVN) also known as the South Vietnamese Army (SVA), was almost eclipsed or shown as scapegoat for military fiasco in the “Americanized War” in Vietnam [See Nixon’ s “No More Vietnams” & Its “Vietnamization”].
2. Opposed to full-motion, the war happening scenes are shaped with a constant “cinematic” cutscene pattern of [a] well organized & motivated war conduct by the North Vietnamese VPA & NLF/VietCong versus [b] inaccurate tactics & strategies of the US Armed forces, with [c] incompetent military intelligence, and [d] unfit alliance from South Vietnam regime & its ARVN.
3. Constant reminiscence of “Vietnam Syndrome” perspectives & false justification by selective or convenient American film archive & Hanoi propaganda “color” film footage.
THE VIETNAM WAR, a film by Ken Burns & Lynn Novick is fundamentally unreliable, unhistorical, and biased. A super media misrepresentation.
We do respect the needs for America Internal Reconciliation, but we continue to claim for the rehabilitation of the Real History vis-à-vis Vietnam as a nation & its people [both sides/both sights] victimized & cheated by the Cold War/The Containment Doctrine [ending deus ex machina with the “Fall of Saigon”]. Berman: “No Peace no Honor: Nixon, Kissinger and Betrayal in Vietnam”.
Containment is a geopolitical strategy to stop the expansion of an enemy. It is best known as a Cold War foreign policy of the United States and its allies to prevent the spread of communism. As a component of the Cold War, this policy was a response to a series of moves by the Soviet Union to increase communist influence in Eastern Europe, China, Korea, Africa, and Vietnam. Containment represented a middle-ground position between detente and rollback. [Wikipedia]
Indeed, THE VIETNAM WAR [sic] was not a “war of the people, by the people, and (especially) for the people” of Vietnam.  Vietnam during the Cold War and the Containment Doctrine era was only a geopolitical detour (or a “monkey bridge” of temporary use] to America, China, and Russia coexistence conspiracy: the so-called “Paris Peace Accords”, 1973 was made in China, for the interests/short term benefits of the USA and for the international supremacy classification — USA number One.  China number 2, etc.
THE VIETNAM WAR, by itself is conducted under false pretenses of generating & defending democracy in Vietnam.  Instead, it was “implanted” in Vietnam by the geopolitical strategy of “containment”  for the pursuit of the Cold War and the rise of Super Powers towards world supremacy.  Vietnam & its people are only the geopolitical steppingstones of this War of deception.
By the fact, the side effects of the false & pretended “VIETNAM WAR” present three aftermatch realities — of real (clear) politics:
1. Reeducation [detention/forced labor] camps & reversed “empty/illiberal” democracy in [liberated, independent, but sinicized] Vietnam;
2. Folkloric & cinematic “Vietnam syndrome” in the USA;
3. And a super Frankenstein’s monster “made in China” with fake capitalist & neo-imperialist ambitions, competing in world terror by aggression & counterfeit.
The cinematic & historic VIETNAM WAR duly pay respect to Sir Winston Churchill for saying: “We have no permanent friends and we have no permanent enemies; but we have permanent interests.”
Anything else is conflict justification towards conflict stabilization with more than five million war deaths and casualties among North & South Vietnamese soldiers, civilians, detainees, boat people, refugees; and 58,000 Americans killed. 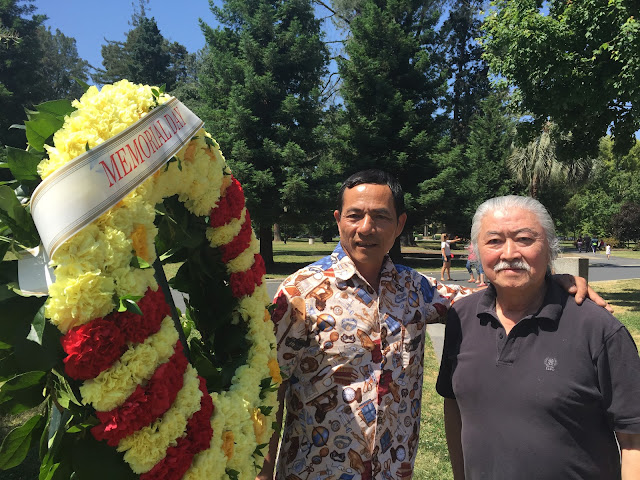 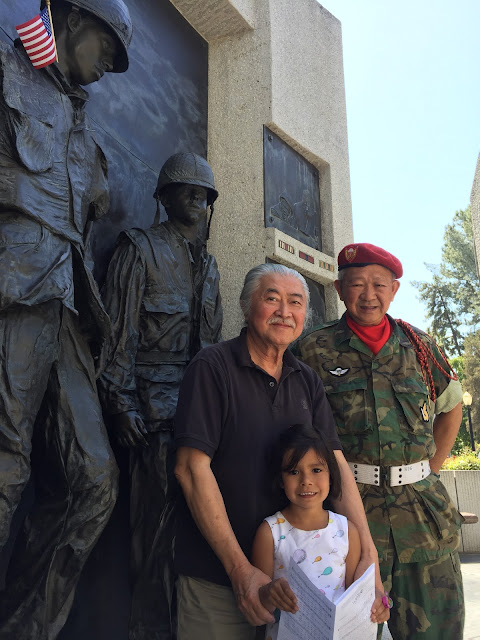 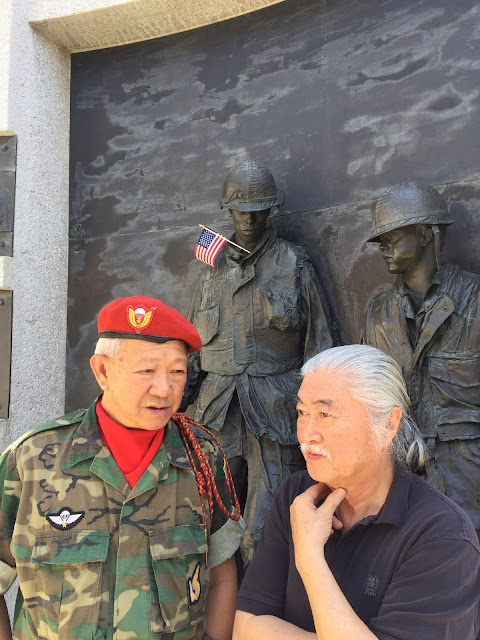 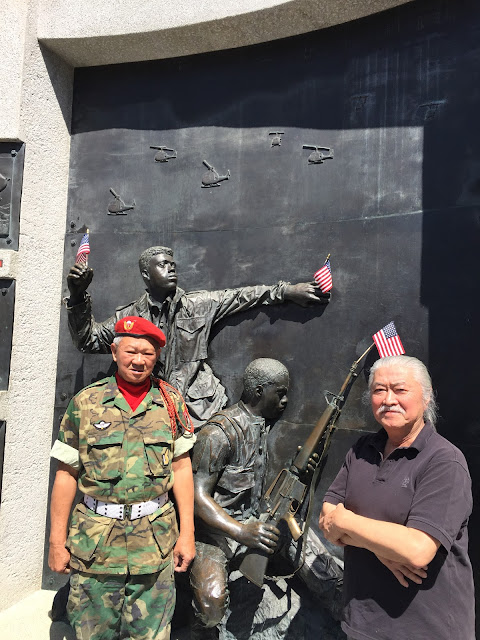 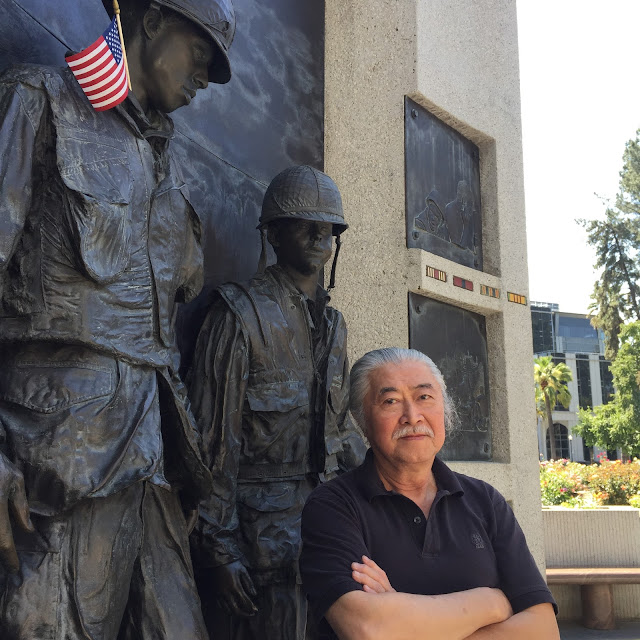 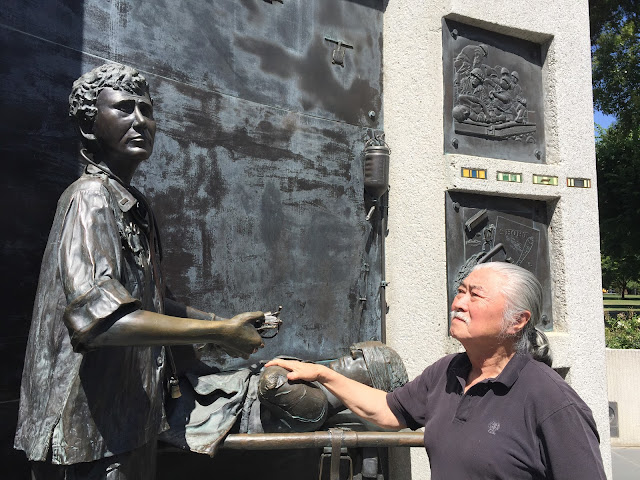 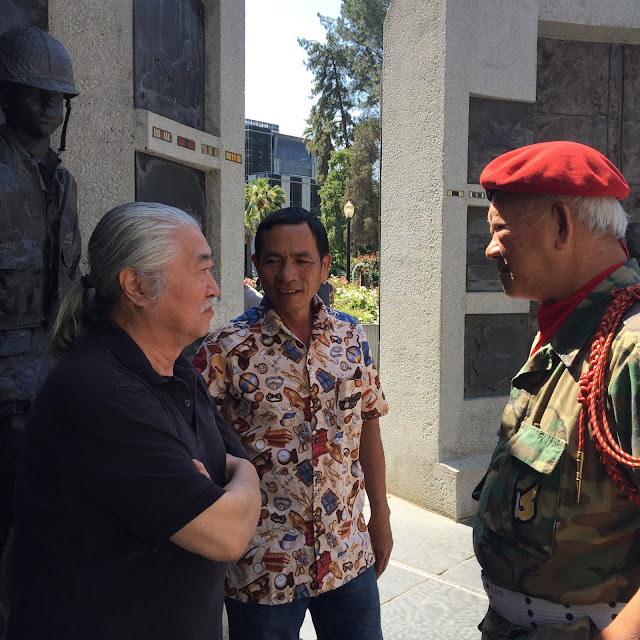 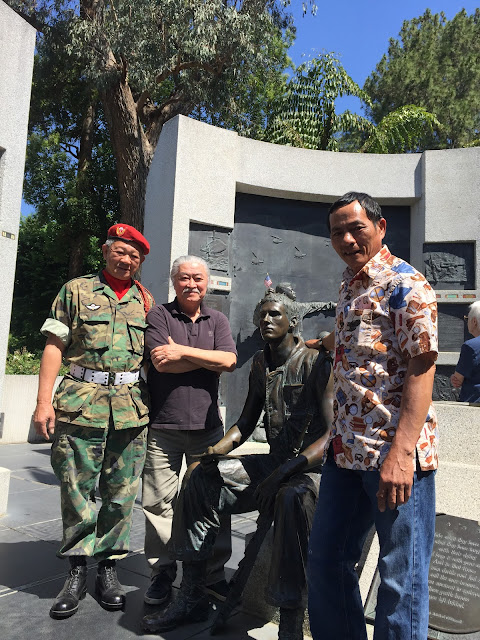 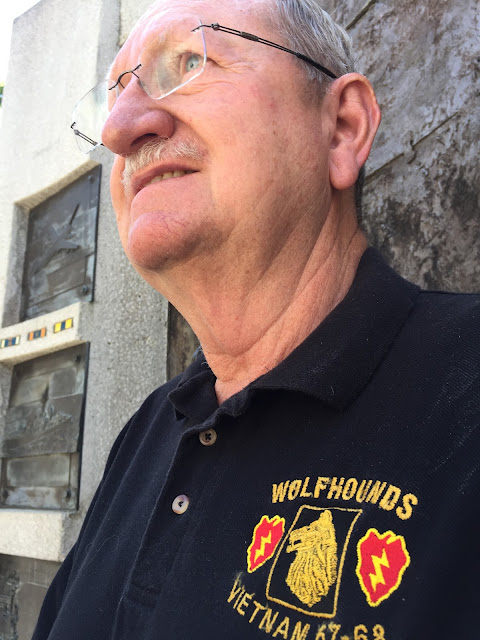 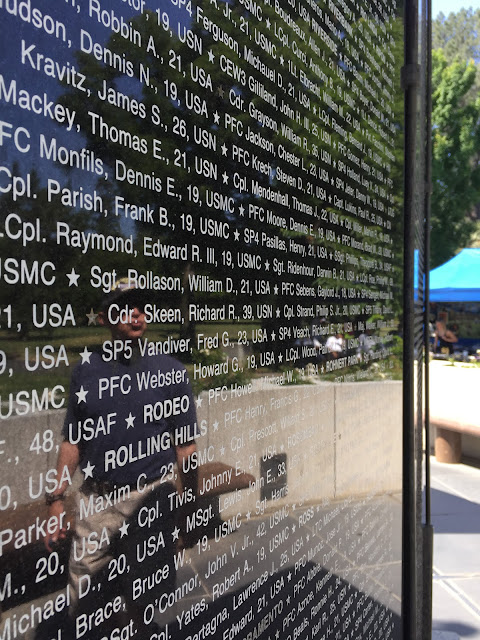 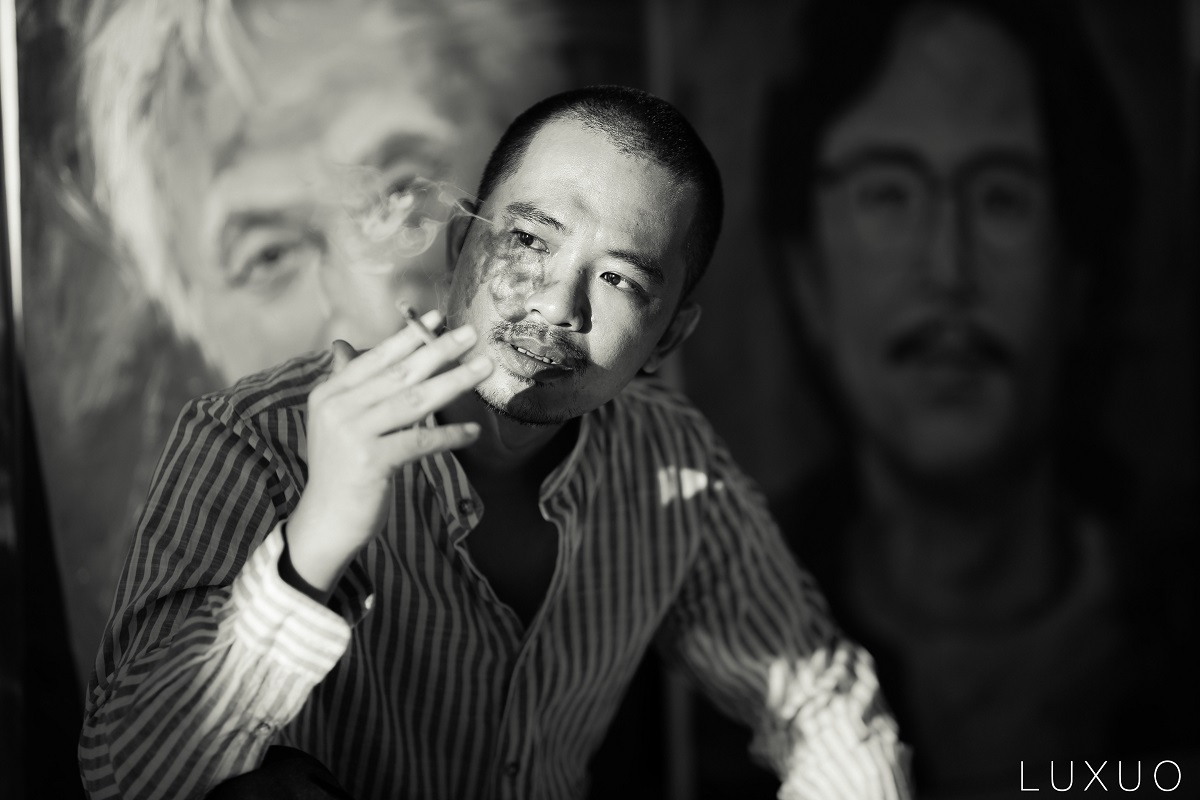