THE MEANING OF TRUE ‘HAPPY VESAK’ FOR A WRITER

THE MEANING OF TRUE ‘HAPPY VESAK’ FOR A WRITER


About 5 years ago, I wrote a very short article called, Happy Vesak; its essence is still hold true today. Yet, this year is so special for me since I am going to speak at The 12th of International Buddhist Conference on the United Nations Day of Vesak 2558/2015 in Bangkok, Thailand on May 28 – 30, 2015 (BE 2558). The theme for this year is Buddhism and World crisis, which will be held at The Mahachulalongkornrajavidyalaya University (MCU), Wang Noi, Ayutthaya and United Nations Convention Center Bangkok, Thailand. I am one of the panelists in the sub-theme of Buddhism Response to Educational Crisis.  (http://www.undv.org/vesak2015/en/conference4.php). Let’s reread the essence and nuance of the Happy Vesak article in the Spring of 2011.


In Nepal, 2633 years ago, Siddhartha Gautama, the founder of Buddhism, was born 563 BCE Lumbini, Nepal.  He passed away in 483 BCE Kushinagar, India at the age of 80.  During the month of April, Buddhists around the world are celebrating the Buddha’s birth (This year, 2009, the Buddhist calendar year is 2553).  The United Nations also recognized and celebrated this annual event called Vesak.


Vesak or Lễ Tam Họp is a very special and spiritual day in Buddhism that commemorates the thrice sacred events of the Buddha’s birth, enlightenment and passing away. It is officially known as the United Nations Day of Vesak (UNDV) since 1999 under UN Resolution No. A/RES/54/115. The United Nation recognizes that it is a worldwide cultural celebration that was started and organized by the United Nations (UN) to venerate the Buddha as a great cultural and spiritual sage of mankind. The objective of the celebration is to venerate the moral and cultural values, the thoughts of peace, equality and non-violence of the Buddha and to create mutual respect and understanding among countries and peoples over the world.


Celebrating Vesak also means making extra efforts to bring happiness to the unfortunate like the aged, the handicapped and the sick. To this day, Buddhists will distribute gifts in cash and kind to various charitable homes throughout the country. Vesak is also a time for great joy and happiness, expressed not by pandering to one’s appetites but by concentrating on useful activities such as decorating and illuminating temples, painting and creating exquisite scenes from the life of the Buddha for public dissemination. Devout Buddhists also vie with one another to provide refreshments and vegetarian food to followers who visit the temple to pay homage to the Enlightened One.  According to wikipedia: This is how we’re paying homage to the Buddha:


Tradition ascribes to the Buddha himself instruction on how to pay him homage. Just before he died, he saw his faithful attendant Ananda, weeping. The Buddha advised him not to weep, but to understand the universal law that all compounded things (including even his own body) must disintegrate. He advised everyone not to cry over the disintegration of the physical body but to regard his teachings (The Dhamma) as their teacher from then on, because only the Dhamma truth is eternal and not subject to the law of change. He also stressed that the way to pay homage to him was not merely by offering flowers, incense, and lights, but by truly and sincerely striving to follow his teachings. This is how devotees are expected to celebrate Vesak: to use the opportunity to reiterate their determination to lead noble lives, to develop their minds, to practice loving-kindness and to bring peace and harmony to humanity.


In practice, Vesak is an opportunity to bring happiness to others. All Buddhist is concerned with and needs to change and transform in our life as well as others.  It is on this day, the message of peace, of non-violence, of compassion, of equality is refreshing to all Buddhists around the world for them to practice and apply into real actions for the betterment of all sentient beings.

With that being said, I am going to present a paper, which is a very condensed version of my doctoral dissertation. The paper is called: “Mindful Leadership – Another Perspective And Approach To Current World Crisis By Examining The Vietnamese Buddhist Monks In America’s Leadership Practices And Their Contributions To Society.”  It is a phenomenological study or a sociological investigation of the contributions and leadership practices of Vietnamese Buddhist abbots in America. This paper presents “a blueprint for better living, towards harmony and peace.”
Research shows that all transformations start from the within and we, as, mindful leaders must lead inside out with understanding, compassion, and wisdom.
Phe Bach
Posted by Phe X. Bach 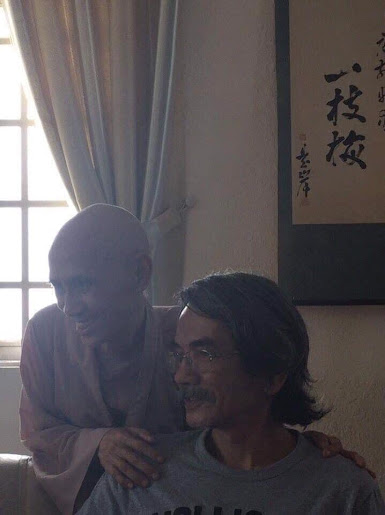