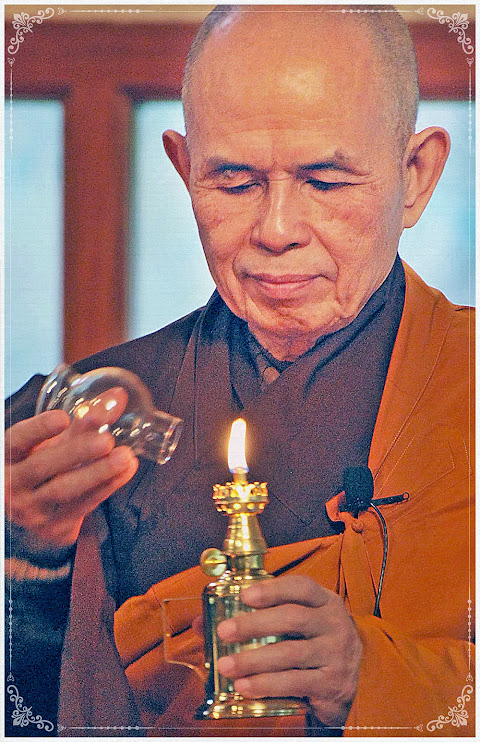 "Thầy" is a respected teacher of many Buddhist generations. He was a true educator who practiced mindful living through each mindful breath and each mindful step. A religious activist who held high regards for a peaceful world, calling for human equality and the liberation of slavery around the globe. In the late 20th century and early 21st century, Thầy was a great culturalist of Vietnamese Buddhism who had built an extensive cultural heritage of international stature, whose poetry and literature have touched many hearts, and whose new tradition of meditations, chanting, and daily rituals filled meditation halls with a fresh, gentle breeze that is easy to integrate. He was a diverse, specific, and extraordinary person: Zen Master Thich Nhat Hanh, founder of Plum Village Sangha and many other Zen monasteries worldwide.

The history of modern Buddhism in Vietnam is no longer hidden under the roof of the One Pillar Pagoda in the North, of the Tu Dam Pagoda in the Thua Thien province, Huế city, or hiding in the An Quang Pagoda, Xa Loi Pagoda in the South. But Vietnamese Buddhism has incarnated throughout many paths of the world. You can hear the sound of the great bell resonating everywhere and echoing the chanting of the verses of the Three Jewels.

The image of the pagoda being the "roof projecting its people" or the "way of the people" followed in the footsteps of monks and nuns. And the Vietnamese Buddhist monk who exemplified this image was none other than Zen Master Thich Nhat Hanh. The Zen Master's books on Buddhism were touched by non-Vietnamese readers. The contemplation and deep thinking that arose from reading his texts was the spiritual gift to cease the pain and sadness in this technologically- and scientifically-civilized Western world. While Vietnamese Buddhism today is present in most countries around the globe, the reality is that people know little about Vietnamese Buddhist monks.

Perhaps spirituality has not been deeply instilled in the Western world; thus, the people have not fully absorbed what the overseas Vietnamese Buddhist community has expressed through their activities on the path of Dharma propagation. Therefore, we need to exemplify our practice more through our religious virtue, by the commitment and involvement with the local communities so that they see the enlightening value of Buddhism, its Compassion, and its Wisdom, and especially its self-sacrificing and serving heart. For those warm reasons, the Vietnamese Buddhist community will not be alone and will not be a stranger to the worldwide Buddhist community. The most concrete and practical thing that must be done is to integrate into the life of the Western world, the local communities. Zen Master Thich Nhat Hanh was able to do this. Therefore, the Zen Master had many non-Vietnamese students: English, French, German, practicing doctors, engineers, artists, actors, singers, etc.

With a new mindset, he methodized many spiritual teachings that are relatable to the people through daily speech and interaction. The result was a vision of Buddhism that is not too far removed from the general public. The Buddha, the Regarded One, considered his blessed disciples as friends and fellow practitioners. Moreover, these fortunate individuals were able to look at the Buddha not so much as a Holy One, like in the traditions of Mahayana Buddhism and Theravada Buddhism, but instead as a humanized figure. We see this portrayal through the stories in Old Path White Clouds. Many Westerners were introduced to Buddhism through this work; a simple Buddhism that counts every step and takes mindful breaths. A non-dogmatic Buddhism that is a gift to youth without the contemplation of something so wonderfully transcended from within, a hidden absolute value, or a diamond that had been buried in a boulder for millennia. Instead, this young Zen generation is reminded to maintain peace of mind, without sorrow, without worry. They're taught to recognize that the green leaves, the silver clouds, and all forms of mountains, forests, and seas are part of this friendly environment in which we are intertwined. The blue sky is home; the soft earth is our blanket. We should approach them because they are our own peace and happiness. We can see that Plum Village tradition activities closely interact with nature through these images. The images of the Zen Master holding a child's hand walking on a green pasture or on a gravel path through silent mountains, eating under trees, teaching Dharma in blossoming forests, truly exemplify living in harmony with nature. The Zen Master urged people to protect nature and not to destroy the earth.

Today, Zen Master Thich Nhat Hanh no longer has a physical form, the form that the five aggregates fabricated, or that the four significant elements were constructed so that disciples and followers all over could pay respect, show love, and protect. But instead, the Zen Master has left a great legacy and a literary culture for many generations to recite and practice. Zen Master Thich Nhat Hanh still lives through those noble treasures.

Zen Master Thich Nhat Hanh is not gone forever; he lives in each page of his literary work, in each image of a group of people walking in mindfulness or meditating on towering mountains and deep valleys. The Zen Master is present beside the old pine tree, on the green pastures, under the cool shades of the trees, meditating in the present moment, here and now. The Zen Master lives like nature that has existed beautifully for lifetimes. He did not allow a stupa to be built to honor him with incense. He does not live in a stupa; he exists everywhere – in Nirvana of No Abode.

The Vietnamese Buddhist community also has many forefathers who were committed to spreading the Dharma abroad, who gave themselves wholeheartedly to serving the Vietnamese Buddhist culture so that it could plant its roots in the Western world. However, those aspirations and undertakings were not sustainable. Their descendants – their disciples – did not have the capacity or ability to carry on their teachers' endeavors. Thus, those undertakings have almost faded away by now.

Zen Master Thich Nhat Hanh often said and wrote: "sit firmly like a mountain" and "float like a cloud." Clouds do not die – don’t perish – but instead change their state of existence in the vast skies. The Zen Master's disciples do their best to preserve and flourish the noble and sacred endeavors of their teacher. This is an act of utmost importance and urgency that exemplifies gratitude and appreciation. Gratitude to the Buddha or gratitude to your Master have the same meaning. Doing so, then "sitting firmly like a mountain" will be a symbol for generations to come to express their admiration.